We believe that a lot of movies - particularly the more violent ones - are not for little kids. Just a personal feeling that they are not really appropriate - ie. the ratings. Today, Mo came home talking about how he was playing at recess with the boys and they were playing Batman and Star Wars and he had no idea what they were. He played along for awhile, but the jig was soon up. Then, once again - he played by himself. Let me preface this and say - he JUST turned five.

Are we hampering his social development by making him the 'different' kid on the playground? Is his childhood going to be like mine? Amazing at home and terrible in the school yard? What are we to do? We read Roahl Dahl books (dark indeed), do not filter information about death and sickness, but explain it when asked. He watches the news with us, and we tell him the truth. He knows where his food comes from and where babies come from... and yet I feel like maybe, maybe we SHOULD let him watch these movies.

Then, this past weekend, we were at a beautiful wedding at Camp Wanakita. My Tent Sisters were there - fellow wild women of the woods (one was getting married), and my friends little guy - well - he is JUST LIKE mine. They played non-stop, in the sand, in the creek, in the trees. Not one mention of movies or superheroes, they talked bird calls and cool rocks. Too bad he lives all the way in Nelson, BC. They performed their made-up songs on the stage and ran themselves ragged at the party. SO neat to see, Mo has great friends - better than great friends, but this connection is was a rare jewel. 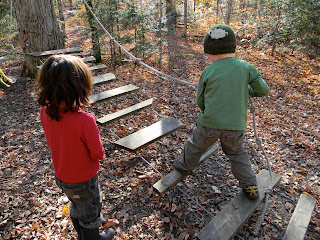 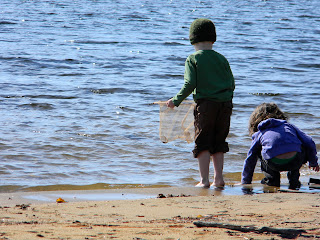 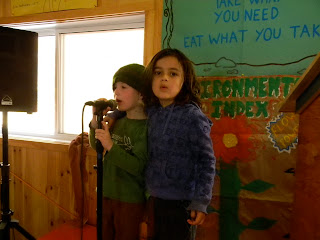 So, I guess, there has to be some sort of happy medium - but where is it exactly? In the meantime, well walk in the woods and enjoy some wholesome time - and let him just be a kid. Soon enough he will start arguing to watch things we don't agree with.
Posted by Peggy Collins at 8:28 PM