Why I love my Son's Kindergarten 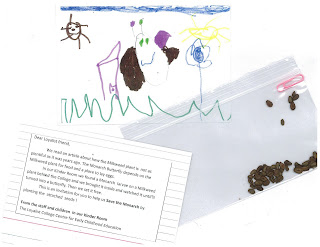 For this, and so many other things - I am grateful to have an on-site kindergarten that is so nurturing, inclusive and aware for my son. It is a combination of great teaching, love and attention to each child that makes it such a special place. This also explains my sons need to collect milkweed pods everywhere we go these days. We now have a jar of seeds and a jar of fluff on our shelves. And a field-full of milkweed at the base of our property. Thank you Loyalist CECE for making school so special for us. These past weeks, mo has built a crane to rescue something in a sewer with his teacher, he has learned to spell orange, he has learned songs and dances, he has learned the science of magnets - and so much more.
Posted by Peggy Collins at 6:52 AM No comments: 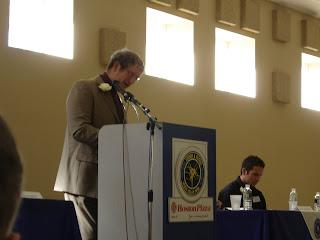 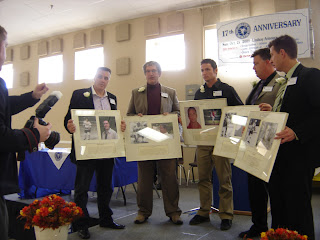 Yesterday my father was inducted into the Lindsay Sports Hall of Fame,
as an athlete and as a coach. When you grow up with a pro-football player as a dad, you take some things for granted. When you grow up with people like our parents - you've got it made. We were driven to every practice for every sport - we were coached and chaperoned and we were supported in whatever we chose to do.

The thing about this induction was - I realized that other people see our dad as a mentor - and the number of people he has inspired, coached and worked with is pretty unbelievable. Not to mention - he is a great speaker. We have listened to his stories over and over again - have you ever seen the movie BIG FISH? Well that guy reminded me of my dad in a big way. So, realizing that he is a character and much of the stories he tells are rooted in truth somewhere was enlightening.

Usually you have to wait for terrible things to happen to get to hear how wonderful your folks are and meet the people in their lives from BEFORE they were your parents. We got to see that, and so did dad - and it was awesome.
Posted by Peggy Collins at 8:23 AM No comments:

Listening to CBC live this afternoon to the beautiful voice of Steven Page - who always makes me nostalgic for warm summer nights, and sitting around the campfire with friends and co-workers - listening to my friend Luke play the guitar. You know, you never think you will get older, that you will always be young and adventurous, and then all of a sudden you realize you've become all of those things you were so sure you never would - or COULD be - does that make sense?
We get older, we have kids, then we spend most of our time being amazed at watching them grow - and time passes. Next thing you know your 4-year old is examining your hair telling you to pull out all those white-silver ones. I am not complaining, I love my life - and know I am so blessed. I am just musing on these facts...
I started teaching this year - which I love immensely. I am learning so much, and don't think I am particularly great at it yet, but I think I might be eventually. I feel energized in a way I haven't in a long time. It is the promise, the excitement of the students as they prepare to tackle the world, bringing justice and social change. They are not jaded, or too busy being grown up to care. It is a very refreshing thing to witness and be a part of. There is still a part of me that is 5, and 12 and 17 and even 23, and I am sure as I age parts will stick with me along the way of all the pivotal moments in my life. They say you can condense your life into 5 pivotal moments - I have to think on that.
Posted by Peggy Collins at 11:39 AM No comments: 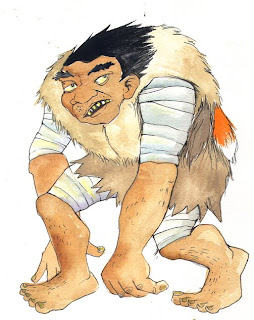 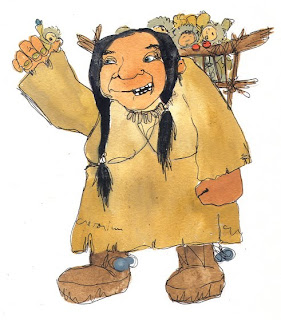 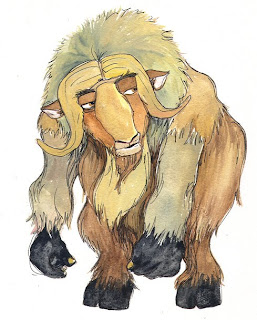 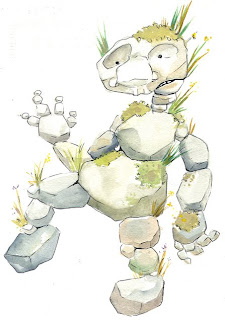 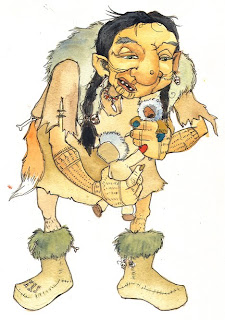 Besides growing a baby, starting to teach, renovating a crappy old house and evicting random squirrels, skunks and raccoons from the property... I have also been working. I am almost completely finished the book set in Gambia, will post more of this later. Here are a series of characters based on Inuit mythology for Inhabit Media. These are ©2009 Inhabit Media.

Talking about birth with a 4 year old

Besides the fact that our son is wishing I will have a car instead of a baby, he has been very curious about the whole process. He was born by emergency c-section and I've had to explain this to him. There was a lot of medical intervention and it was a scary experience. In the end we ended up with a beautiful, healthy little boy. I've been talking to him about his sibling, who is due in February 2010. We are 20 weeks now. This time we have a midwife, I feel more empowered and I know nothing really goes according to plan when it comes to this stuff, but we are aiming for a natural birth this time with as little intervention as possible.

Tonight, my little boy and I are were having our nightly snuggle, quietly, in the dark and he says,
"Mommy, I don't want them to cut you this time." I was floored for a second. I assured him that it did not hurt me, and that we were all good and it was ok. He said again, "I think it would be better if the baby was born the other way this time - will it hurt you?" and he nestled in. I told him that, yes, it would hurt me a little, and I would have to work pretty hard - but only for a little while - and then we would have our baby. We snuggled for a bit, he, lying on my belly, listening and his sibling giving him little love taps. It is a moment that will be emblazoned in my memory forever.

So I ask - where does a 4 year old gain this insight and feeling?

Books we've been reading - It's not the Stork and Being Born - two great books that beautifully illustrate the thigs you need to talk about, in a gentle and informative way.

We have our ultrasound on Tuesday - and I can't wait for our son to see the baby this way too. These are special times.
Posted by Peggy Collins at 7:17 PM No comments: 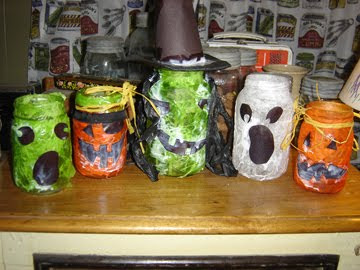 I found this craft this morning on notsoidlehands.blogspot.com... And so we had to try it. These are really goopy. I am not one to control the pace of a craft with my son, I give him the tools and he goes, so we used up a LOT of modge Podge today, and once these dry (maybe by halloween?) they will be rockin! Can't wait to see them with all the lights. 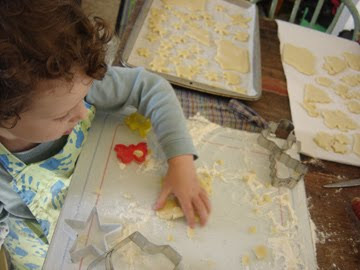 Remembering being a Work at home Mom....

I have been on a doctor imposed sick leave. I am pregnant and have a really bad flu. Not Swine flu, thank goodness, but have been knocked flat for awhile. Anyway, my son has been home with me, since his school is in Belleville and it was not at all convenient to bring him there every day.

I was home with him for the first two years, and I count that time as the happiest and most fulfilling of my life. I have been back at work for 2 years now, and he is pretty institutionalized. We are lucky, he has had amazing caregivers in incredible centres - I really can't say enough about them. And so, since last thursday we've been stuck with each other...

At first, in the interest of full disclosure, and keeping in mind the fact I was really, really sick and tire, he drove me crazy. A kid who is used to having other kids around to play with all the time, when faced with a sick invalid of a parent as his only diversion is - to say the least - INTENSE. I would be lying if I said we never watched TV (which we did) and is not a part of our regular routine, but I was DESPERATE. I let him watch a lot of it. Now I am afraid I've killed half his brain.

But, these last few days, I am still not well, but I at least have had some energy and can function, we've been having a good time. We are back in our groove. He knows when I need to take care of things he needs to play by himself. He is a grand little helper. We baked cookies, done lots of crafts, and played one heck of a lot of LEGO. We've had at least a small nature hike every day. I have a new admiration for him and his vivid imagination, he sees things in the most incredible way. I wish I felt better, but this has been such a lovely gift - a blessing in disguise. I am very glad I was able to enjoy some of it. Now I look forward even more to February when I will be off with my two kids, Mo will be in school, but only 2-3 days a week.

Motherhood, in all it's forms, rocks. Even when you feel like garbage.
Posted by Peggy Collins at 5:36 PM 1 comment: