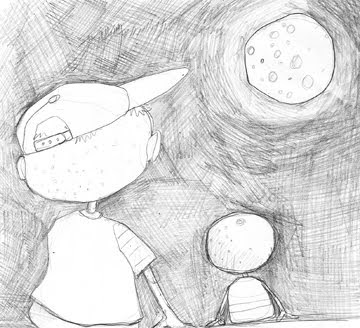 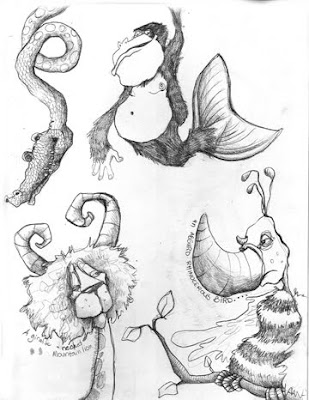 Just loosening up my hands again... with no real direction - just having fun... though about to start up some real projects again... with dinosaurs!
Posted by Peggy Collins at 9:45 AM No comments:

Typing and Rocking at the same time... 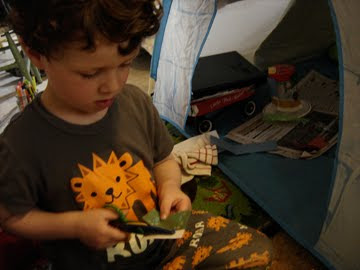 On a rainy day we set up a little tent in our living room. I went upstairs with Zaley and when I came down mo had moved all the craft stuff into the tent and was making a piggy bank. 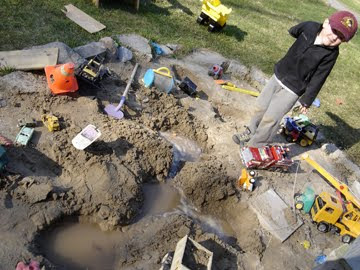 ... this is what we've been doing outside instead of gardening... 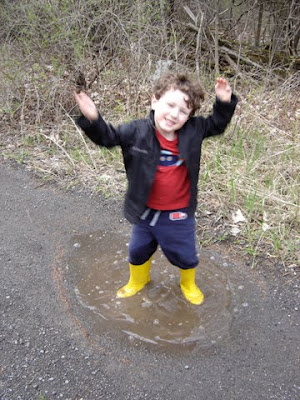 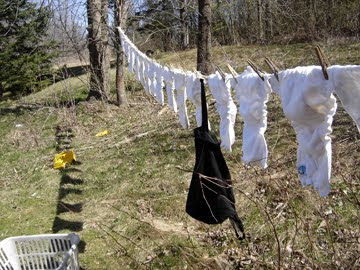 So, it has been awhile. I have to say life is BUSY. But good. I've been working on a friends wedding invite package and my printer is so unbearably slow it is driving me nutty. I am sitting here, typing, rocking my babe with my foot and ignoring the dishes in the sink - though soon they will come to get me.

It is a beautiful day out - but the BLACKFLIES have started up already. This morning Mo and I were kicking the ball around and they were already biting. UGH. We have not yet started on the planting in the garden yet - and it seems late - though it is still only April - so I think I can take that one a bit slower. Things are a LOT harder to get around to with a busy 4 year old and a baby who can only tolerate being outside for so long... She is wonderful for sure, but at 7 weeks she spends an average of 2-4 hours outside a day... is that too much?

Thing is, I NEED to be out, right now it is killing me being inside, but I have work to do, so here I am. We will be going for a walk shortly though I think - and hopefully I will move fast enough to get away from the bugs.

As for cloth diapering - we are still at it! Though I must confess, I have switched to disposables at night... she sleeps much better, thus - so do I. Hopefully we can switch back again, but for now we are in survival mode and sleep is key. One thing I do have to say though is - cloth diapers never blow out. I think I have already saved several loads of laundry from blowouts that cover everything (including me) - so another point for cloth.

And, last night I actually got to sketch, only for 5 minutes, but it is a start. We are figuring out how to get both the kiddies down by 8:00... tricky, but we're getting there. Once that happens perhaps some of my brain will return home and I can think again!
Posted by Peggy Collins at 8:30 AM No comments: 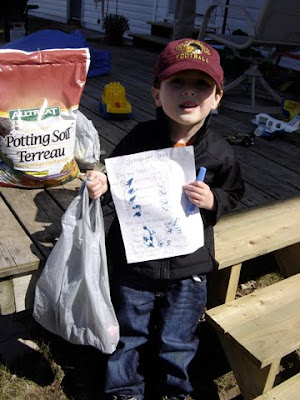 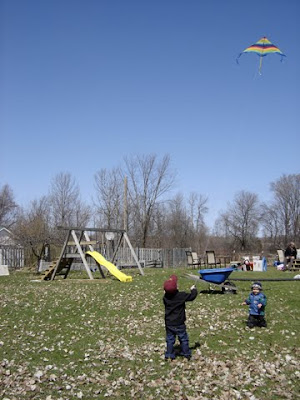 What a weekend, a bit cool - but sunny and lovely.

I started out on Saturday hanging my cloth diapers on the line - a lovely, satisfying sight.
I have to say I am in love with the Mother-ease one-size bamboo diapers. They are so soft and lovely. I like them much better than the Sandy's - which are great too, but the one-size ones fit better and feel better I think. I will be going back to Go Green Baby in Kingston for some more.

Then I took the kids to a friends place for a party - we stayed till 5pm. We flew kites, had a scavenger hunt, played trains, and I had lots of arms to hold my baby. Good times with great friends.

Today, my baby sister and her partner came to visit before they head back to Kenya with Free the Children. Jod has been there since January and won't be back again till October. Her visit home this time was a surprise and a real treat. She got to meet Azalea and hang out with Mo all last weekend and today. I am sad to see them go, but they will be back soon - and I am so proud of her. We went for a lovely walk and then they had to get back.


I will miss them very much. 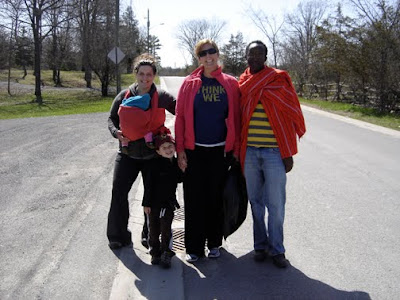 Posted by Peggy Collins at 6:34 PM No comments:

Cloth diapering is something I planned on doing with my first. Until our well dried up that fall, and doing any laundry consisted of trekking to a laundromat. So, when we got pregnant with our little girl I felt like it could be redemption time. So, I researched. I looked everywhere. I found my 'guru' in very close friend who has successfully, and consistently had both her boys in cloth diapers.

They loaned me some and I bought some used over the internet. All are in great shape and so soft. I have tried Kushies, and did not like them, and a few others - but these ones are the Sandy MotherEase model. They are awesome. So yesterday, knowing I would be home for the next 24 hours I thought I would give it a go. Up until now I had been using them, but only when convenient. Youknow, it got easier and easier throughout the day to use them. And then I ran out, I have about 16 diapers right now. Not enough for a newborn who pees and poops constantly. She seemed very comfortable in them, and once I got used to her having a giant bum - they looked really sweet. The only thing is, as soon as she goes, she freaks... she HATES being wet. Good for toddler potty training, not so great for a newborn, it made her slightly grumpy.

Anyway, suffice to say, I loved it - and I am proud of making it through the day. Not to mention I felt guilty whenI had to used the PC green Disposables again. I need a few more diapers, though I may go a size up, since at 5 weeks she is already 12 lbs. The bummis wraps are so sweet, but the small barely fits! So now I need to contact my diaper lady and see what she has for me now... I want to find the flowered bummi wraps...

My little boy is also so proud... he loves to help with the wraps and says every time - see mom, we just saved a garbage diaper : )

Thanks Elaine.
Posted by Peggy Collins at 6:18 PM No comments: 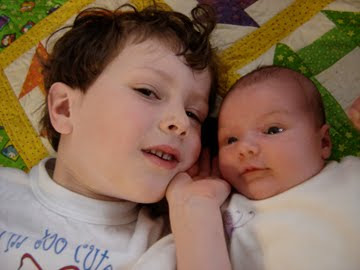 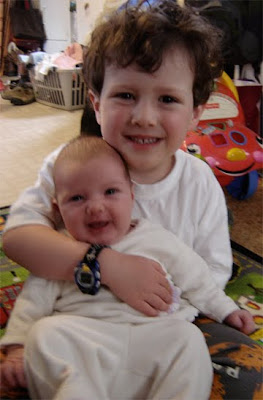 It has been 5 weeks.

Our baby girl is growing like a weed, it is amazing, every single day is a new adventure. I could spend all my waking hours watching her... but I can't. Mo needs me too. Life is crazy and hectic and lovely all at the same time. We are settling into a groove, Mo is an awesome big brother, and Shawn is incredible. The second time around is really neat. There is so much less stress, expectation and anxiety... for both of us. It just is, and it is SO REFRESHING. Of course there are the usual worries that come along with parenting, but for me, I feel prepared for them this time.

I have also come to realize that after I had Mo, I was depressed. Very. I had a tramatic and scary and out of control birth with him, and it affected me much more than I realized. And now, after my medication - free VBAC, I feel great. Powerful. Strong. Like the woman I know I am. It is wonderful. Special thanks go out to Shawn, my partner with eight arms, my midwives, and the nurses at KGH.

And now, I feel like working again. Not the fever pitch I was in in January, but I do finally feel like painting and working on some of my projects. I do have to understand though, that my time is limited, much more now than it was - and just take it easy. AND, to only say yes to jobs I am really excited about... so, let's see where it all goes.
Posted by Peggy Collins at 6:26 PM No comments: